Folk Dance Remixed is a company that truly fuses old with new, making obvious the links between different traditions of dance. Seeing their show at Cecil Sharp House the audience was a great mix of young funky urban Londoners with older, traditional folk dance fans. The ceilidh brought everyone together as if they always knew they had been dancing to the same beat! A proper fusion! 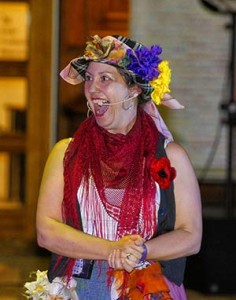 Kerry Fletcher has been steeped in traditional dance and music from an early age. Her mother ran the celebrated folk club, Duke’s Folk, in the 1970s, spawning the likes of Chris Wood and Oyster Band. She has been a morris dancer, run a molly dancing team and danced with the Albion Band. She has worked in all aspects of folk festivals from running a small European music and dance festival to working backstage and sound engineering at many festivals including Sidmouth and Towersey; tour manager and project manager, including for composer Ben Park at Battersea Arts Centre and Jo Freya’s European band Freyja on a 10 week tour of major European music festivals; visiting lecturer at Newcastle University on the BMus Folk Degree course, working with the foot percussionists and the musicians on playing for dancing; to performing at The Sage Gateshead with Circa Compania and The Southbank Centre, London with Stepback. Kerry has been creating new work based on traditional material for many years, for example, The 4K Plot at The Baltic, Gateshead. Most recently, she is coordinator of the Folk Educators Group, a national network facilitated by the English Folk Dance and Song Society (EFDSS). 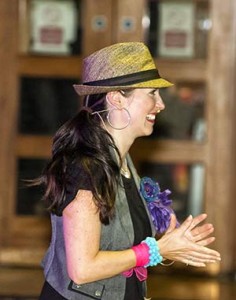 Natasha Khamjani has always danced and in the 80’s shunned ballet for disco! Since then she studied dance and choreography in depth and developed a passion for hip hop, although works in a variety of styles. She has worked in most areas of the industry including dance, opera, musical theatre, ceremonies, TV and education. Her first encounter with hip hop theatre was working for Jonzi D on Aeroplane Man in 2002 as education workshop leader. She was hooked and went on to develop her own work under the company name of Twitch and now as a freelancer on various commissions including Electro Swing (fusion of swing and hip hop styles) and the Big Dance Bus (a comical narrative piece that used many different styles). In 2011 Natasha worked as a choreographer and project manager on the WorldSkills Opening Ceremony with a cast of 600 performers. In 2012 she was invited to work on all four Olympic Ceremonies and took care of Danny Boyle’s Maypoles in his Green and Pleasant Land. In 2013 she mainly focused on touring Folk Dance remixed but managed to fit in two mass education projects, one at the QEH and one at the RFH, South Bank Centre. She has just finished work on the creative team a mass movement coordinator for the Rugby League World Cup.